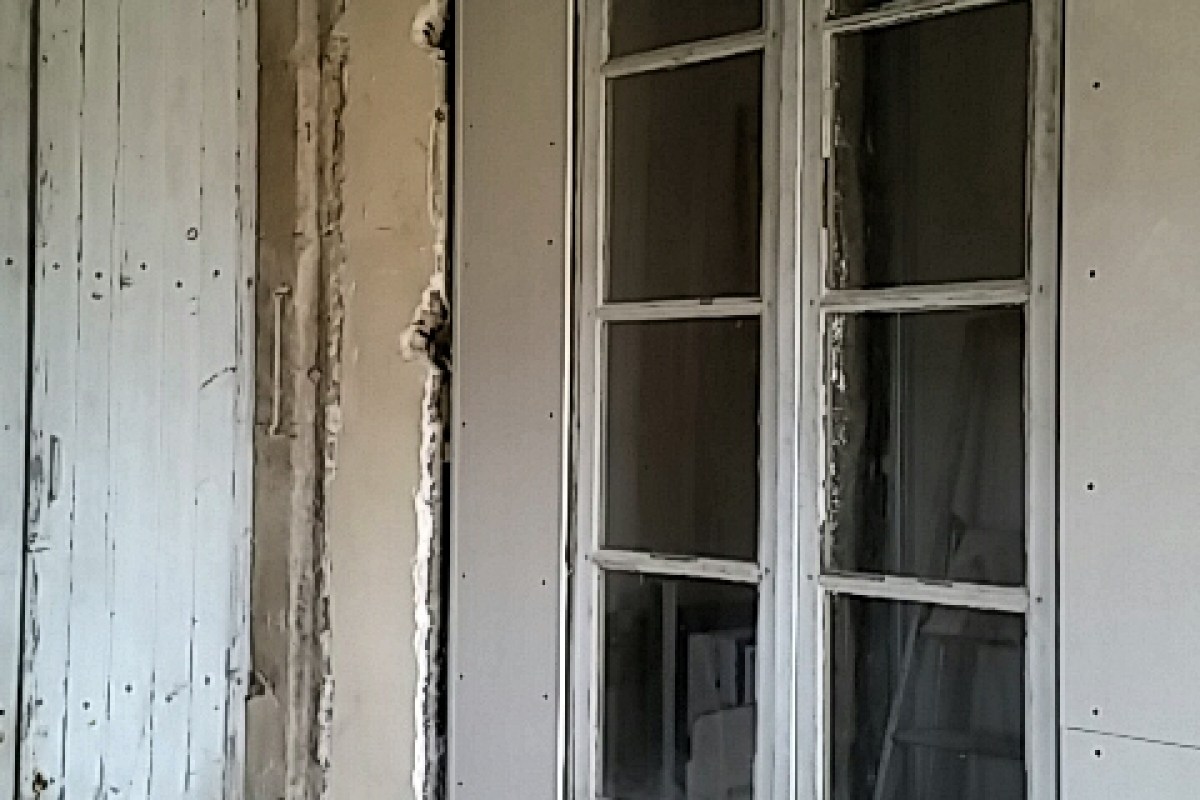 They are finally going to replace my windows. No big deal. That has been the plan all along and the replacements will look like the old ones but meet modern energy standards. The only thing is, all these barely worn and rotting window frames — they are only 155 years old, after all — are about to be thrown out. I needed to keep at least one pair, just as a point of reference. But which one, where and why?

Well. As I was nattering about this, we decided to move the ground floor WC. Fanatic readers will recall that we removed the service stairs. The freed – up space became a sort of utility chase,  especially useful for the euphemistically named sanitary waste. So we joined fixture to drain, making installation easier and improving the proportions of the utility room. Excellent,  but now the WC has no window. Eew.

Except that now it does. Kieron and Eddie removed the dog/mud/utility room window and set it into the adjacent wall. I think I’m the only one that loves it.

This is where the whole Blandings thing comes in. Now we have to replace some clear glass with frosted — curtains got the emphatic contractor thumbs – down — and reputty all of it. Then they will likely fill in all those rotten bits, then repaint. So no, the reused window isn’t actually free.

But painted drywall would have been so boring…

It’s a lovely Sunday afternoon, a rare, almost summery day. Here in Paris the city has organized something called the Fête de la Musique, which I think means Music Celebration Day, or near enough. The idea is that if you play an instrument,  on this day you should get it out and play it in public. The amazing thing to me is that people do. Everybody is on the street and a lot of them are carrying, even playing, instruments.  It’s free and great fun.

Let’s use this kitchen. It’s almost finished, right? We’re missing only the cabinets, the frig, the sink, the taps, the countertop, maybe just a couple of other things. Really, it’s basically all here.
More seriously, I am in receipt of a solemn promise that this will be a working kitchen by 4 July. On that day, I think I will rely on my local knowledge to guide me to one of several good nearby bistros. Should that prove to be unnecessary, I will happily open a magnum of California’s finest to share with the workers. I might even cook dinner for them.

Yes, those are the long-awaited heating coils. Actually, I have to rely on a contractor photo for this, as I was in Paris when things were at this stage. Now these little tykes are buried in concrete, waiting for their final connection. The electrician is here for the next two weeks, as is the plumber. Summer vacation is in the air, so they want to get things wrapped up. Actually, rumor has it that the plumbing and electrical will be 100% complete by the end of July. I live in hope.

Yes, the big ditch has been dug, loaded with conduit and piping and, since this photo was taken, refilled. I now have electrical and plumbing points of connection to the back fence. More importantly, I have the aquathermal system finally taking shape. All the relevant parts now run from their supply and return points to the house. Quietly efficient plumbers and electricians are now hooking all that stuff to machines that have sat unused in the basement for months. At least that’s what I think they are doing down there. The end could be near. Or not.