I got this phone call from Stuart, who is on the job site. “Lynn, you chose a real paint color for up here, didn’t you. It’s dark, it’s cool, it’s funky, I really like it.” Oh no, I thought, oh no. I may occasionally wax maudlin about my love of denim blue but really, I’m getting a little old to be living in some kind of Haight Street crash pad. I did that 40 years ago, thank you, and got it out of my system. Or did I? Is my attic having a flashback? I asked for photos.

I think it will be okay. It’s a country house, a grown-up’s country house. I remember seeing photos of one of Louis XIV’s hunting lodges. With its carved wood panels and all, it was clear that guy didn’t go camping, not in the Teddy Roosevelt sense. That lodge, I thought, is my idea of country living.

Sadly I don’t have Louis’ budget. But I did hope to go for some melange of earthy and elegant. I wanted grays, grayed greens and soft whites to waft one gently from the entry hall to the dining room and up the stairs to bed. Lovely and mature, like I prefer to think that I am. The hint of green would enhance the red in the beams and, against the skylights, would recall the foliage and sky of the surrounding landscape. Darkness and funk were not in the program.

So we’ll see. I went with Little Greene paint. I think this is Normandy Gray, which I chose for the shutters and for a few other rooms. I can’t wait to see it in person.

When I lived in California, I redid a series of houses in a more-or-less “graduate student’s dream house” style. I had an English cottage phase, where I stood over my husband while he sat at the drawing board — yeah, it was a long time ago — and chanted “steeper roof on that addition, steeper roof,” until he said “Lynn, any steeper and we won’t be able to shingle it.” Then I made him help me hang British racing green wallpaper with little pink roses on it — a plumb-and-level pattern on crooked old walls. We shingled the outside and planted old-fashioned roses. The fireplace mantle piece was supported by plaster casts of those little winged angels that were so popular a couple of decades ago. The house was adorable but the marriage fell apart and we sold to a philosophy professor at USC. I hope she is still there, still enjoying it.

Then I moved on, way on, and eventually settled in a Victorian that I rescued from renter-trashed oblivion — a little reminder that real graduate students have torn paper light shades and cage-free cockatiels — and put in period and repro light fixtures, mainly, before I fell wildly in love, enough to move out of San Francisco and across the bay to bland suburbia. That place went to a very nice couple who both work at SF General. They can walk to work, so I am pretty sure they are still there.

Fortunately for the next house, I was finally over the 19th century. Thanks to the patience and bank account of my endlessly indulgent husband, I was able to turn a rather drab post-war Wrightian ranch house mashup into a pretty nice place. Bless his heart, after every project Robert would pronounce himself well pleased. Year after year we’d do a little more. Finally the house was done. We had one January with no hammers, no saws or drills. In March he had his heart attack. There is a cheap or maybe ironic joke there but I’m still not in the mood to look for it. I couldn’t bear to stay, so the house went to a handsome hedge-fund guy and his pretty wife. I hope they had the baby they said they were trying for. I think it would be a great place to raise kids.

Now I’m back in the 19th century, up to my ears in it. When I chose my paint colors I went for grays and grayed greens — except for the haunted bedroom, which demanded to be painted pink. When I saw how the color choices were playing out, I had a moment of panic. Where was the denim blue? Every one of my homes, every rental, even, has had some spot, at least, where the denim blue flag is planted and my mind can rest. At this house, I don’t know. I don’t even know why it is important to me, it just is and has always been. It could just be one little corner, the one where I place the blue velvet chair and ottoman that I brought from California. We’ll have to see. 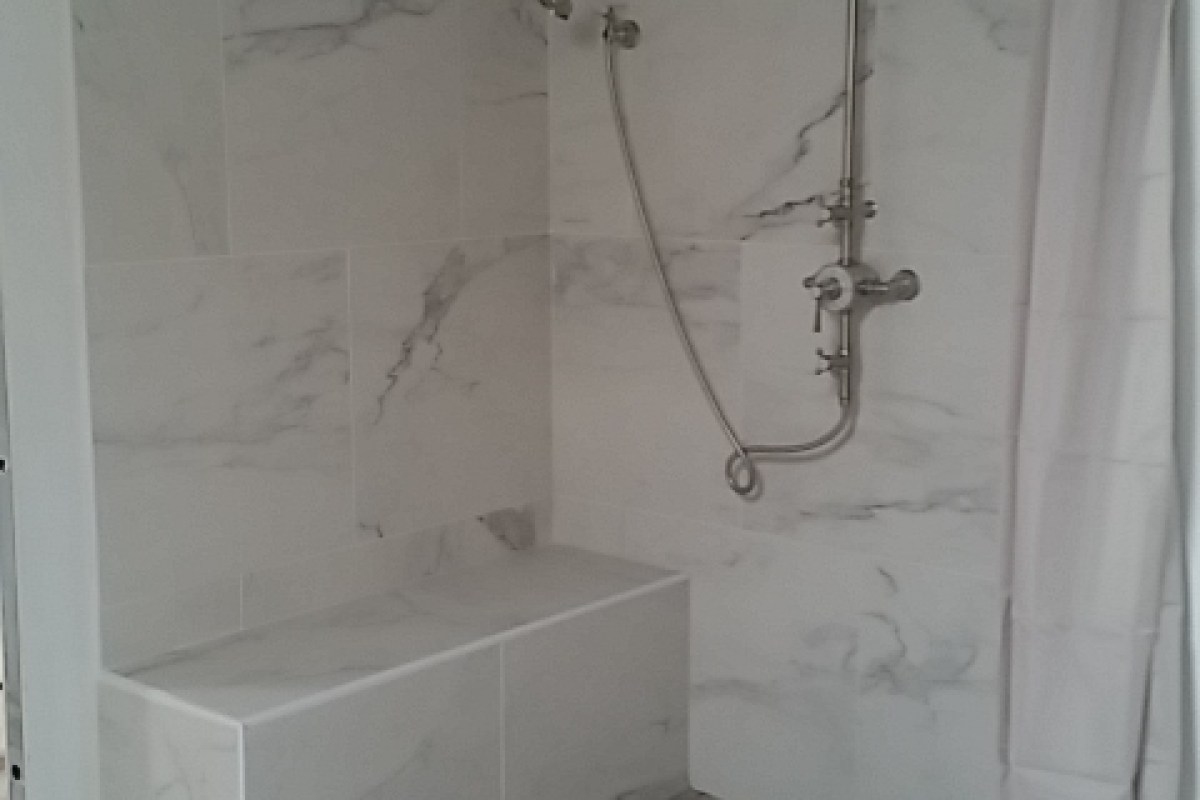 Little by little, it’s happening. The shower curtain is there only until whenever in the fall the glass guy appears to install the enclosure. It’s all usable, though, and it’s nice to see things get even to this point. 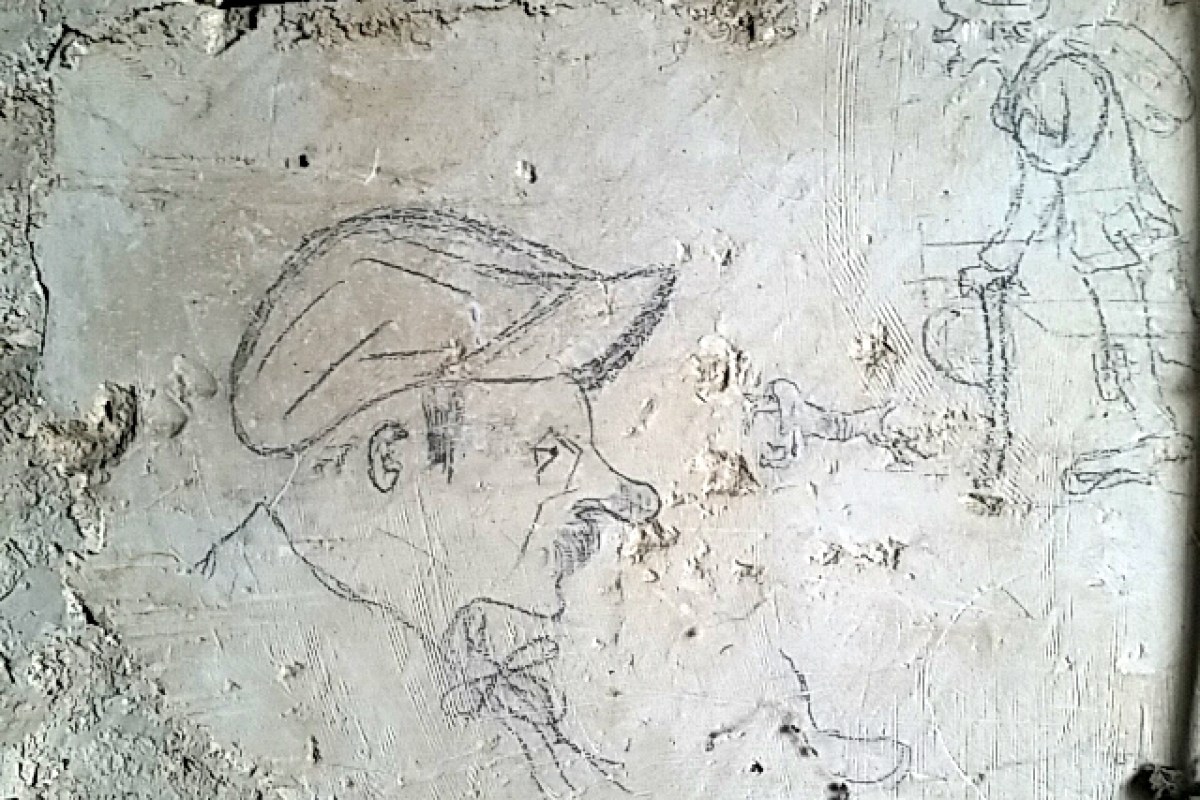 Today I was moving some stuff around and found this on a wall. Must be Eddie, the laborer.

It’s good. Nice sense of gesture, economical use of line, really quite decent.
If Eddie had been born into different circumstances he could have gone to art school, maybe wound up illustrating graphic novels or something. Instead he works his butt off hauling things around, mainly. He lives on hot dogs and white bread. I think he sends all his money home. No girlfriend,  no friends at all, at least not nearby. We all like him but nobody hangs out with him. Maybe some day I’ll find out what his story is. 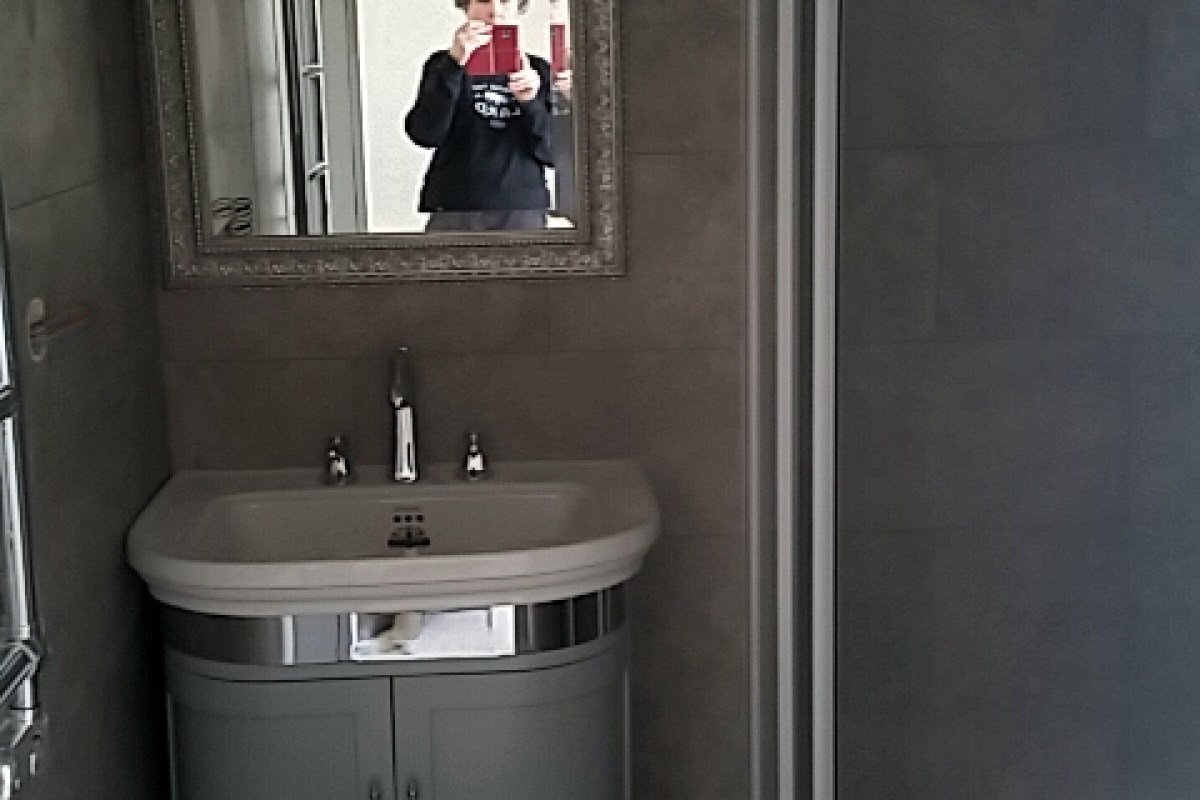 We are almost getting there. Of all the amazing things, this is a working bathroom. Sink, toilet,  shower,  all operational. Lights by the end of tomorrow? That:s what they say. And the right door on the cabinet opens all the way without bumping into anything. At last.

In there, somewhere, they are tiling the apartment bathroom! The end is near! The only trouble is, this should have been done a few days ago.

These guys had a three – month window between their promised end date and my first renters at the house where I have been staying. Three months. Wendy and family arrive on Sunday afternnon and really,  I’d like to be in the apartment.  No way, the guys are telling me, not even if I eat out and skip a shower or two. It’s not the tile. It’s the paint. The finish coat won’t go on until Monday. The floors won’t go in until after that. The floors are the issue I guess, more than the paint.

So I’m driving to Paris, five hours in a Toyota IQ. Did I mention that my car has been in the shop for a month? They are promising that it will be ready on Tuesday.  We shall see.

There is an outside chance that my life will begin to pull back together on Wednesday — car and country abode, both on the same day! — but it would be so silly to bet on that.

That’s Jacques, gazing upon the magnificence that will be the apartment sink. It looks good, I think, even sitting in the garage without its legs. If only we could get those pretty curved doors to open.

Some crazy client — no names, please, this is no time to point fingers —  saw an 85 cm space and thought a 60 cm cabinet would fit just fine there. This assumption being correct until you try to open the curved doors. Oops.

We don’t have 5 weeks for a do – over,  so we’re going to go with this for now. If I ever put a rental in the barn, we could see it as a relocation opportunity. 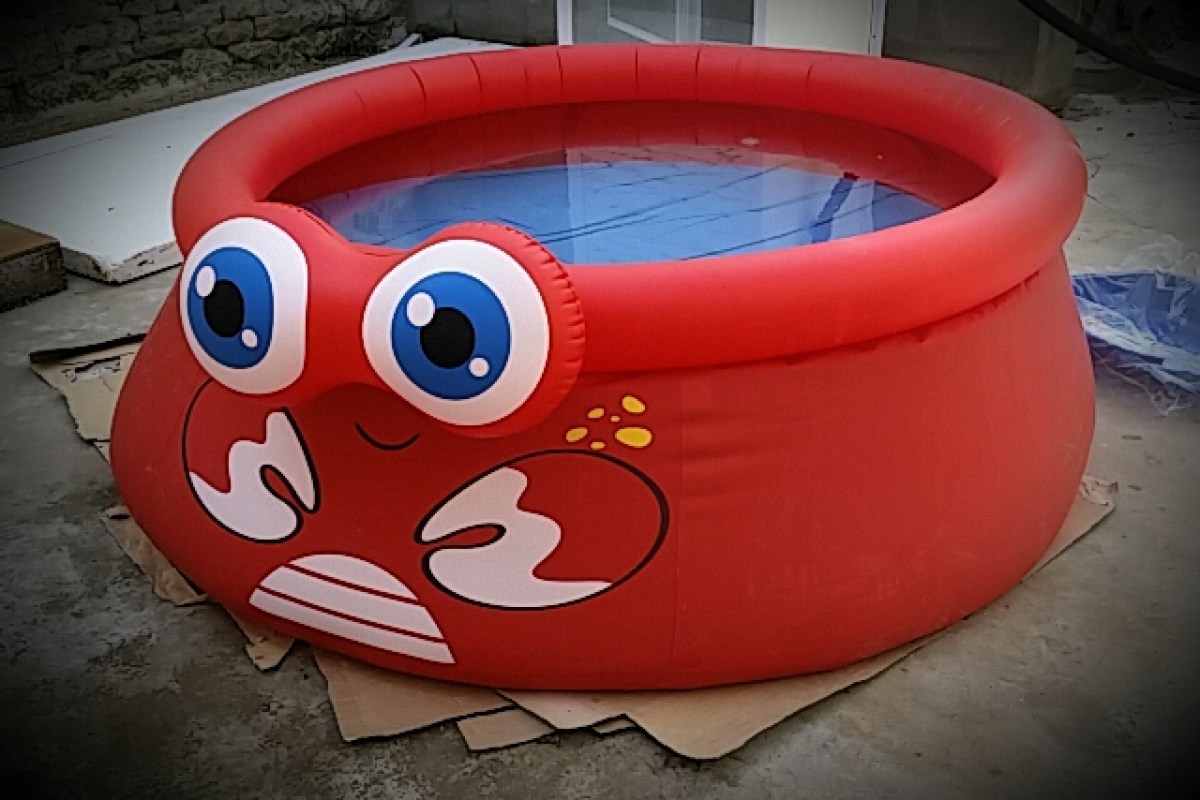 It’s not too bad today but it has been hot, 35 degrees or so, or well into the 90s. In California we had OSHA, which looked out for worker safety. Here, at least on a job like mine, I guess the guys look out for themselves. I have seen McDonald’s wrappers on the job site. I don’t think they are doing a very good job of it.

Seriously,  I started to worry about heart attacks and heat stroke. So when I wandered past these little kiddie pools in M. Bricolage, I picked one up. It was a sort of gag gift, really, but when the guys stopped for the day they set it up and jumped in. They actually do use it to cool off.

When they finally go I think I’ll use it, too.