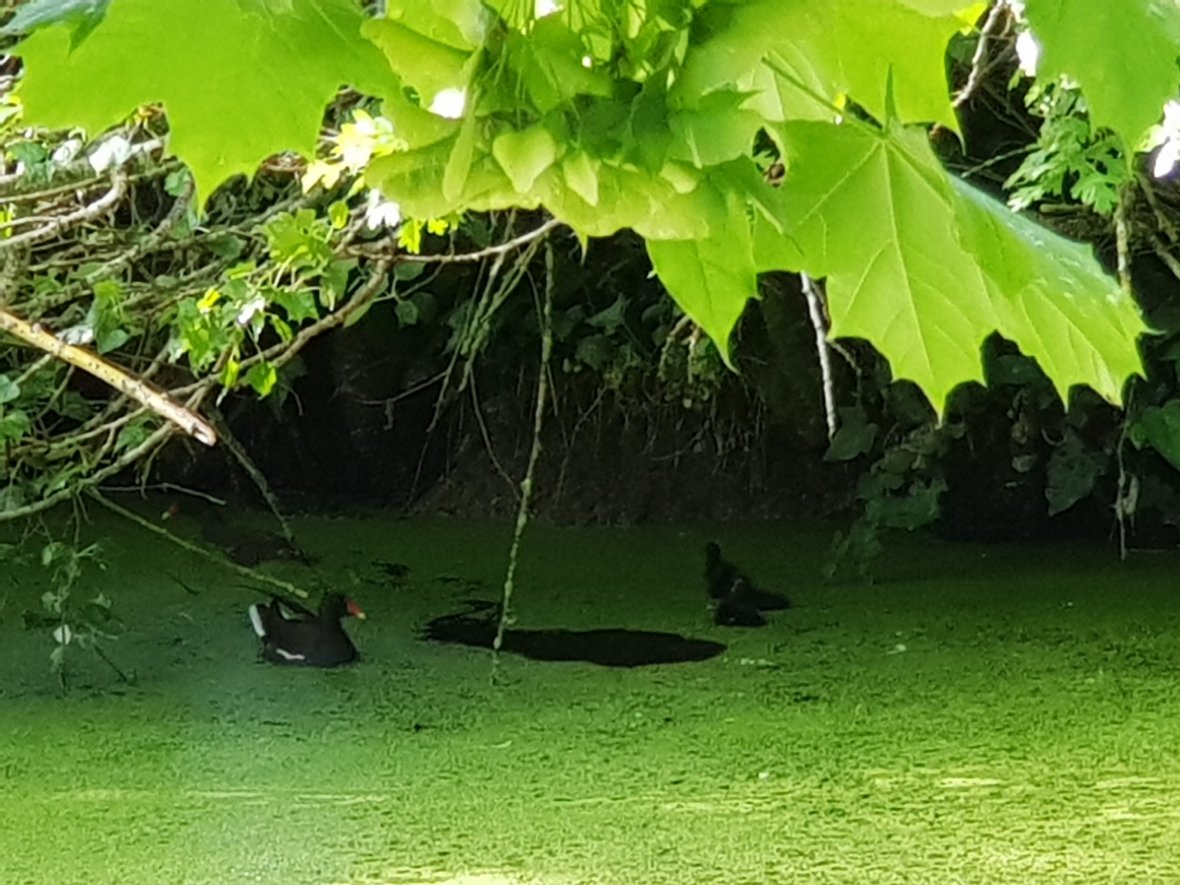 These ducks, a mom and three little ducklings, may be a little hard to see, but they’re fine. The other day I found out why I’d never have made it as a photojournalist. When I found the dead ducks, the thought of taking a picture came right after being horrified. When I did think of it, I didn’t care. I just wanted to know how this happened.

At first I thought hunters shot the parents, leaving the babies to die. But the duckling that wan’t floating dead in the water was on the house steps, intact apart from the gouge taken out of its neck. Bugs would not have done that. And why, with such young ducklings, still sporting their downy yellow pin feathers, were there already eggs, beautiful blue eggs, in the nest.

Right about then Julien came by. He assured me that it wasn’t hunters. Hunting season is over. It might have been dogs, but since dogs don’t have access to my pond or to that of the neighbor, it was probably cats. And the eggs? Who knows how they got there, but even if we could reach a nest that was a good meter into the pond, we don’t have the means to keep the little guys alive. Just let it go. And let’s hope the cats don’t get those huge noisy frogs. We need the frogs.

About a week later I was back at the rental house. I couldn’t resist a peek at the nest. It had been dressed up with bright fresh leaves and there was a new mom with new little ducklings. No frogs, but maybe they were just being quiet that day.

So this is what I figure. Somebody’s well-fed psychopathic cats decided to have a little fun torturing and killing, but not bothering to eat, the first batch of ducks. They probably came upon them foraging for insects in the grass, something like that. A different duck found an abandoned nest, too good to resist, dressed it up and settled in. New day, new babies. Did the cats kill the frogs? Is that why it was so quiet? Impossible to say: I’m not that good at frog identification. If I saw the frogs again I’d have no idea whether they were the originals. But now that the neighbor cats know my rental house’s back garden as a happy hunting ground, they’ll be back. I fear for the new little guys.

A Journal of Cultural Inquiry

Living & Cooking in the Dordogne