So okay, inquiring minds, at least one inquiring mind, clamored for more house pictures. The terrible truth is, they are just crazy disorganized. They came from half a dozen sources over what, six years now, so they are scattered all over the place. And while a great mind, Frank Lloyd Wright’s, declared the fireplace the heart of the home, this mind declared fireplaces to be energy inefficient space hogs. In this house they were not even pretty. All were removed. Wright’s symbolic heart, gone. So where to start? Why not the middle?

Okay, too weird. Why not the start? This is the old dining room. Note the gorgeous, probably elm, flooring that has buckled and become unusable because for three years before I arrived, nobody heated the house. Don’t ever do that to your house, not in a place with freeze/thaw cycles and lots of rain.

The guys removed the wood. My request to have it stacked for reuse was met with “Nah nah, can’t hear you,” and every last bit of it was burned. Why did I fire my architect? Here is one reason. So, out came the floor, leaving this odd half-basement that I think was filled, sort of, with rocks. Eventually, out came the fireplace. Of course the icky dark gray marble remains in the garage to this day.

Stone, pierre de Bourgogne to be exact, replaced the wood. We installed heated floors in most of the ground floor, reducing the need for radiators and giving the house nice, even heat. There are no hot or cold spots and the heat is lower than with radiators, so the air is not so dry. That said the heated floor does create a barrier that eliminates mildew, at least in the rooms where it is found. The basement and the utility room can still have problems.

I must have a better photo of the old wall, but where? Anyway, you get the point. The kitchen and dining room were separated by this thick stone bearing wall and the kitchen was a dump, destined to become a big storage area if we didn’t fix that. Honestly, it was awful, useless as a kitchen and, as a dining room, just sad. So they removed the stone and put in a steel beam, thus joining the two spaces. Now the light flows from the front of the house to the back. I have a big kitchen where the elm-floored dining room used to be — note fireplace that warmed Dad while everyone else froze — and improved circulation and access to what is now the dining area.

Here it is, open, free space. Note the hole in the wall. The old dining room had a solid wall flanking the fireplace. I wanted natural light from multiple directions. Also I wanted a terrace at floor level to replace a kind of poky corner outside. So I had the guys put in a window, for which you see the opening, and a door which you see below. It was quite a fight, another nail in the architect’s coffin. But I won and really, it is so nice to have those things.

This, too, gives you some idea of how much nicer it is to have that wall gone. You can see the Lacanche stove where the fireplace used to be. A range hood has since gone in. The plumbing and wiring are in. The walls are insulated and finished; Stuart had a painter buddy who had some free time, so the entire house was painted way too soon, but it was a good job and the guys protected it, so, okay. Stuart and Liam are installing the cabinets, which were made in his workshop. Stuart also made the windows and the door.

The kitchen needs its range hood, but you get the idea. It is big, by French standards, light-filled and highly functional. The bar stools are by Thomas Moser and came with me from California. Most of the lighting is LED spots. The one hanging fixture is from a shop in Melle.

It is so nice and open. Maybe I should have left it like this, but I stood in the dining area to get the shot and I can’t relax at the table if my view is of the cooking mess that awaits me. So I had Stuart add a low bookshelf that is just enough higher than the countertop to hide a world of cleanup.

This is my only immediately available photo of the dining area. The furniture came with me from California. The bowl is made by Soy, in Istanbul. The view came with the house. 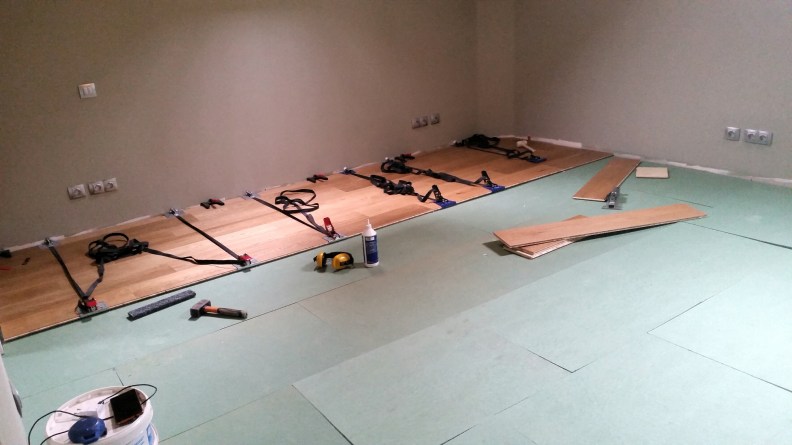 Just about two years ago I walked through this really lovely house with a huge, unused attic. I’m a city kid. The whole idea of leaving 100-plus Sq meters of attractice space unused was unthinkable. In San Francisco,  in Paris, you don’t just let that kind of space sit empty. So I got the house and told my architect to include plans for a master bedroom suite in the attic. He said what, the four bedrooms downstairs aren’t enough? He brought in a contractor who said yes, absolutely, it will be gorgeous. All we have to do is sand the floor.

The architect is gone and the contractor remains. One reason he is still here,  two years later, is this floor. It wasn’t so flat after all. We couldn’t just clean and wax it. We didn’t figure that out until the bathroom was plumbed and the kitchenette cabinets delivered. Oops.

So, as I kept writing unbudgeted-for checks, the guys screwed down the existing floor, with screws at about 7 cm, roughly 3 inch, centers. With the existing floor as flat as possible, they poured a layer of this self-leveling, lightweight,  fiberglass/concrete mixture. On top of that, the layer of green foam pads, to give the floor a bit of spring. Finally, you can see part of the oak flooring that Xavier is installing.

When he is done, obviously all you will see is the oak floor. And how much hidden money, in the form of all those layers, will you be walking on? I don’t know. Maybe this time next year, I’ll be able to tell you. Maybe in 5 years, I’ll figure the amount will be worth it, for all that extra space. Maybe.

Every so often a project reaches a point where it is clear that things are going off the rails. There is no solution other than to knock a few heads together.

Yesterday that is where my project was. I arrived after two weeks away, expecting to have the stone floors complete and the geothermal heating system in operation.  But no. The stone floors had barely progressed. The electrician had pulled off the job. The geothermal system was left just as you see it. We were still reliant on space heaters. And oh,  by the way, the electrician was refusing to return until he had been paid in full: 100%, when only about 85% of the work had been done.

Time for what one of my former managers, a staunch Baptist, called a “Come to Jesus” meeting. In other words, no more going along to get along. Time to get serious.

I haven’t needed my game face in 30, 35 years. Like everything in that back closet of my mind, it doesn’t fit very well any more. But I squirmed into it. With the help of Sophie,  my general contractor’s French wife, we got the message through to him that there would be no payment until we had a final contract amount. There would be a 10% retention until project completion. The vague accusations were to be replaced — by the end of this morning’s meeting — with specifics regarding any work that he felt was slowing his progress.

We got it all. Time for a victory lap.

This mass of rubble may just look sad but really, this represents good progress. You are looking at the most significant architectural change to the house. The contractor has removed the wall between the kitchen and dining room. Please note the bravura performance. They removed a rubble wall that was maybe 12 feet high, even more across, and about two feet thick. They inserted two steel beams, getting them dead level. They installed concrete block walls to support the beams. This was all done while working on an uneven, unstable surface and without damage to the existing, fragile, directly adjacent cornice. One day the National Trust will find out about these people and we’ll lose them to much more prestigious jobs. Today, fortunately, they are at my house.

We are now ready to reverse the kitchen and dining room. The man you see in the photo is part of the crew that is doing the rough wiring and plumbing.

At this point we have light from two sides of the room, which is already lovely. In the next little while the frames will arrive for the window and door that will be added on the wall to the left. Given the amount of light that has already been added, more light is hardly necessary. However it will be nice to connect the kitchen to the terrace, which will be just the other side of the wall.I don’t know about you but if I don’t see a space, or if it is hard to get to, I don’t use it.